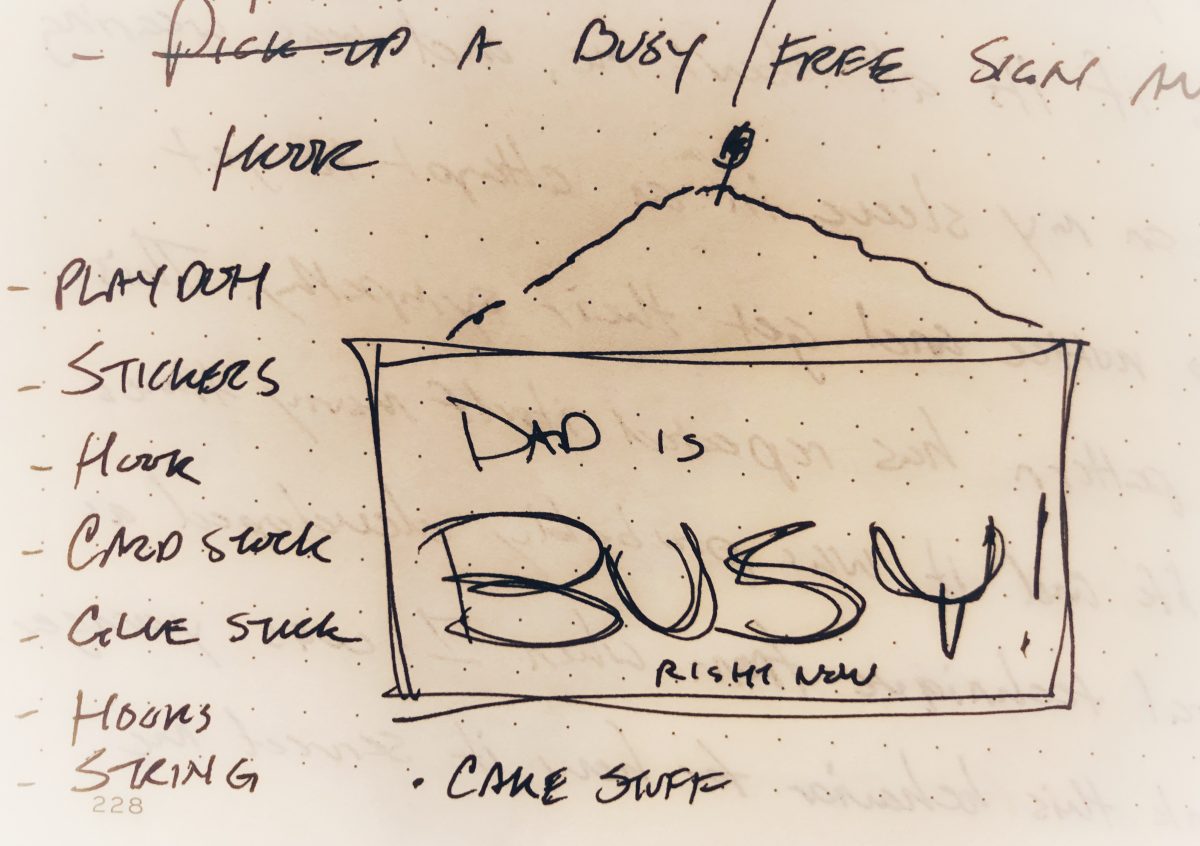 2 comments on The (home) office door

Working from home full-time is fantastic, but having an office in a small house with two small children means that staying focused can be a challenge.

As any parent will tell you, a closed-door is not a universally recognised symbol by children to knock or come back later. It’s more like a general invitation to see what’s happening behind. A locked door generally leads to more knocking. You have to get a bit more creative if you want to minimize interruptions. So I had an idea.

As a project, the kids and I created a few things for the office door that now serve as an interface between us while Dad is working.

The first part of our system was some status indicators that showed whether Dad was working or free. This took the form of a sign that could be turned to read either “Work” or “Chill” (yup, I’m really showing up like dorky Dad already, and it’s only going to get worse), and there are rules for each “status”. When the sign says “Work” you can still knock, and if Dad is free he’ll come out for a short chat or a hug goodbye. If not, he’ll holler through the door when he’ll be free, say goodbye and/or continue on working, which leads to the second part of the system: the tray.

The other key ingredient of our system was to hang a tray on the outside of the door to do things like pass messages back-and-forth or leave drawings to find. Sometimes, I’ll create a “worksheet” during my afternoon break, with a silly drawing to color in and some sentences to complete, and I’ll leave it for the kids for when they get home from school when I might not be able to see them right away. Then, they can work on it, send it back, or make me something new.

This system is nothing fancy. It was created collaboratively, which means the kids own it as much as I do, and because there are multiple ways to interact, it’s flexible. Having the physical artifacts set-up to see and interact with makes the whole thing tactile and exciting. It’s more like play, something to be enjoyed, than a set of rules to follow.

Interface: 1 : a surface forming a common boundary of two bodies, spaces, or phases

2 a : the place at which independent and often unrelated systems meet and act on or communicate with each other

2 b : the means by which interaction or communication is achieved at an interface

Systems like these, really just established agreements or interfaces for communicating and interacting in general, are really important and often a simple solution to something frustrating you. Not able to focus at work because you are getting distracted? It might be a good idea to establish an interface with your coworkers to manage that better. Feeling like you want to spend more time with your partner in the evening, but other things keep getting in the way? It might be a good idea to have a set time and place to do that regularly. In that case, if it doesn’t occur spontaneously, you know it will still happen.

There are other things I’d like to do with the “door interface,” and it will evolve. I also use it to post my schedule for Kav to see and reference, as well. Of course, she could always ask me, and the kids could still come into the office if they need to. Spontaneous person-to-person interactions are necessary, and I love them during my day, but having the office door set-up for one less distraction and one more drawing or hand-written note is pretty great too.

2 responses to “The (home) office door”