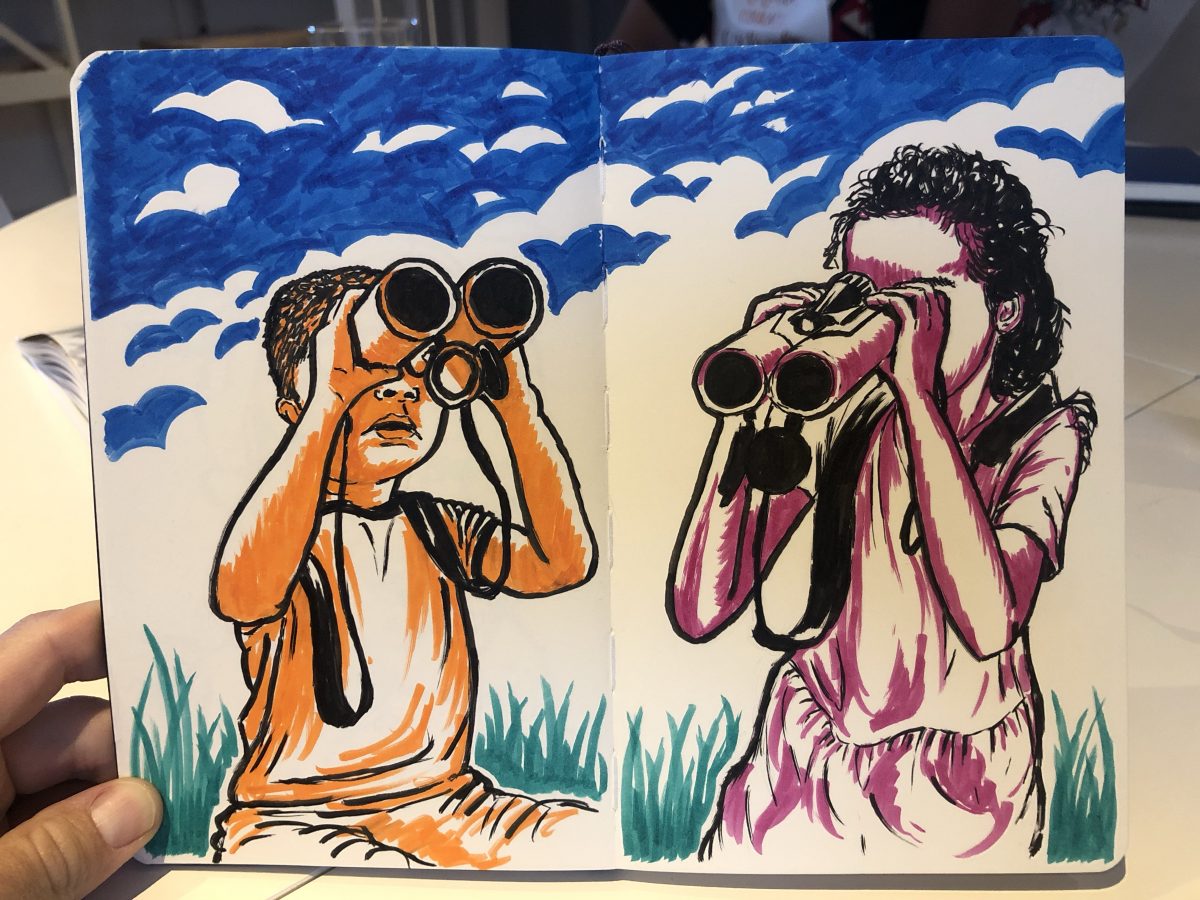 I received a pair of binoculars as a birthday present recently, and the kids and I have been using them to explore the surrounding country and notice birds. Just in time for summer. I also read more of What It’s Like to Be a Bird and was again reminded how crazy cool birds are and how much we still don’t know about them (like when irruptions happen), which makes me happy.

Here are some sound and vision-related facts abut birds that I think are super cool.

The snipe, like many other sandpipers and ducks, can see the entire 360 degrees around, and a full 180 degrees overhead, all at the same time. And instead of seeing a small area in fine detail, they see detail in a wide horizontal band in each eye. Imagine being able to see the entire sky and horizon, and some detail along most of the horizon, without turning your head.

Even with their excellent hearing, most owls still require some vision to capture prey, but Barn Owls are able to capture prey in total darkness, using sound alone. Experiments have shown that Barn Owls can pinpoint the location of a mouse thirty from feet away, strictly by sound, and then fly to that exact spot even if the mouse makes no further sound.

Barn Owls can determine the precise direction to their prey because of their ear adaptations. But how do they know the distance? And once they leave their perch and begin flying—in total darkness—how do they track their progress in the air and land precisely on a tiny mouse thirty feet from their starting point? These are unanswered questions.

Look at a single word in this sentence, and then try to read the words around it without moving your eyes. That tiny area of detail in the center of your vision is because of the fovea, a small pit in the retina of each eye where light-sensing cells are more tightly packed. We have one fovea in each eye, both eyes focus on the same point. and we see one spot of detail.

Eagles, however have two foveae in each eye, for a total of four, and they all point in different directions.

An eagle is seeing four different areas of detail at all times, as well as nearly 360 degrees of peripheral vision!

Murres, related to puffins, feed on small fish and commonly dive to six hundred feet or more below the surface of the ocean, using their wings for propulsion. At that depth, even on a bright sunny day in clear water, the light level is the same as midnight on the ground with just a sliver of moon.

It seems unlikely that they are using vision to locate and pursue their prey, but nobody knows what senses they are using. Similarly, no one knows how the birds withstand the pressure at those depths (for example, how they keep water from penetrating through their feathers), or how they can trace that far and fast without breathing.

There is evidence that songbirds have two different systems for detecting the orientation of the magnetic field as well as the slope of the field (which varies with latitude from horizontal at the equator to vertical at the poles). They can also detect polarized light, which fives valuable clues to the position of the sun even when the sun itself is not visible. All of these senses might be linked to the birds’ vision, so it is possible that a songbird sees some sort of compass guide all the time.